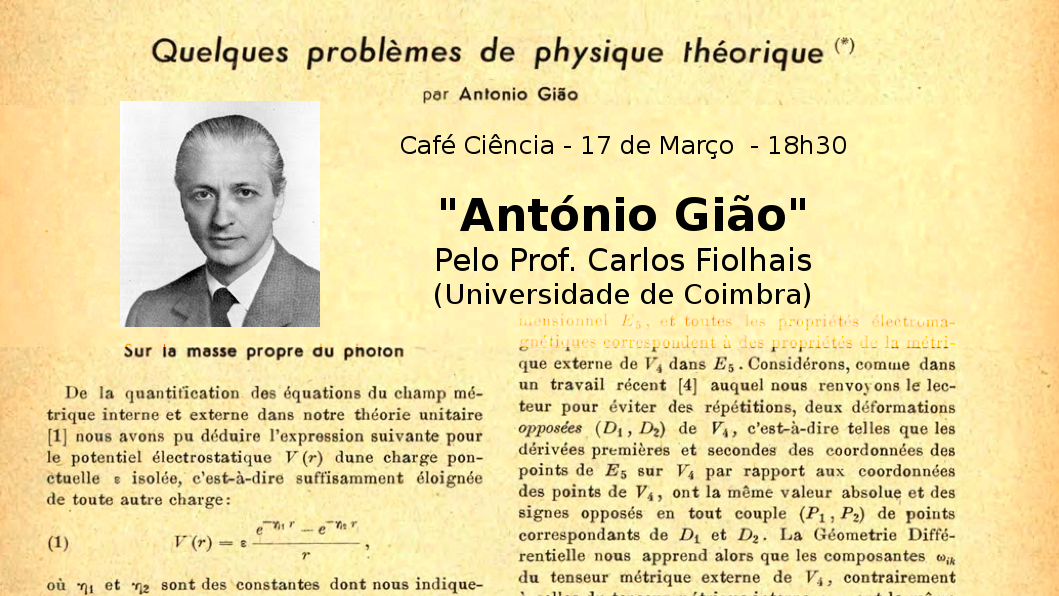 António Gião: The physicist from Reguengos de Monsaraz who corresponded with Einstein

Professor Carlos Fiolhais from the U. Coimbra will tell us about António Gião, a physicist from Reguengos de Monsaraz, author of a vast work in several disciplines of physics and who corresponded with Einstein.

António Gião (Reguengos de Monsaraz 1906 – Lisboa 1969) was one of the 20th Century portuguese physicists with the largest number of publications (140 in total). He worked mostly in meteorology but also contributed to the areas of particle physcis and cosmology. His academic path starts in 1923 when he registers in Physics-Chemistry course at the University of Coimbra. However, still in his second year, he leaves Portugal to Strasburg, France, following his dream of studying meteorolgy.  In the following year, still as a student, publishes a brief article on clouds in the pretigious journal Nature. In the following year, he graduates in Geophysics in Strasburg. In 1927-1928 he is sent by the portuguese Ministry of Navy to Norway, more exactly to Bergen, with the aim of studying the latest meteorological theories. In 1929-1931 works in Paris, having published the book La Mechanique Différentielle des Fronts e du Champ isallobarique (1930), with introduction by Émile Delcambre and Jacob Bjerknes, two top meteorologists. In 1922 proposes the creation of the Institute of Meteorology in Portugal but there was no follow up. In 1946, returning to Portugal after the War, takes residence in his family mansion in Reguengos and corresponds with Albert Einstein and Erwin Schroedinger. In 1960 starts the final phase of his life when he moves to Lisbon to become full prefessor at the Faculty of Sciences of the University of Lisbon and researcher of the Calouste Gulbenkian Foundation. In 1962 directs the Computer Center of the Gulbenkian Foundation. In 1961 his students of the Faculty of Sciences complain to Salazar of his poor pedagogical skills. In 1962 enters in conflict with colleagues when he declines a graduate student of Sebastião e Silva. In 1963 creates the journal Arquivo do Instituto Gulbenkian de Ciência da Fundação Gulbenkianand and organizes in Lisbon the conference Cosmological Models with the presence of  Hermann Bondi and Pascual Jordan where the young Stephen Hawking attends. He dies in 1969 of a renal disease.

In this presentation, his works on cosmology will be emphasized, in particular his disapproval of the Big Bang theory which is one of the last before this theory becomes main stream in the scientific community.

Carlos Fiolhais
Was born in 1956 and is full professor at the  Universidade de Coimbra (UC). He did his first degree in Physics and Chemistry in 1978 and graduated in Theoretical Physics in Frankfurt am Main, Germany, in 1982.  He published more than 50 books among which,  Física Divertida, Darwin aos Tiros, Pipocas com Telemóvel, A Ciência e os seus inimigos, etc. (Gradiva, the last three with David Marçal); Ciência a Brincar (for children Bizâncio); textbooks in Physics and Chemistry (Texto Editores); História da Ciência em Portugal (Arranha Céus); Biblioteca Joanina (Imprensa da UC, with Paulo Mendes) and, Os Jesuítas. Construtores da Globalização (CTT, with José Eduardo Franco). Co-directs Obras Pioneiras da Cultura Portuguesa (Círculo de Leitores, 2017) and directs the collection Ciência Aberta of Gradiva. He his a collaborator of the newspapers Público and As Letras entre as Artes. He his responsible for the blog De Rerum Natura.

Today he researches on History of Sciences. He is author of more than 150 scientific articles, one of which holds more that 13 thousand citations (the most cited by an author in Portugal) and of hundreds of pedagogical and outreach articles. He coordinated several research projects and supervised about 20 graduate students. He presided the European Council of the European Physics Journal. He directed the review  Gazeta de Física. He was director of the  Centro de Física Computacional da UC, where he installed the largest national computer for scientific calculus, and the General Library of the UC, where he accomplished several projects related to books and reading. He was the responsible for the knowledgement area of the Fundação Francisco Manuel dos Santos. He directs the Rómulo – Centro Ciência Viva of the University of Coimbra. He is co-founder and manager of the company Coimbra Genomics.

He won the 1994 prize Prémio União Latina for scientific translation, in 2004 the Globo de Ouro in Science of SIC, in 2005 the Prémio Inovação of Forum III Milénio, in 2006 the Prémio Rómulo de Carvalho of the Universidade de Évora and in 2017 the Grande Prémio Ciência VIva – Montepio. He received the Ordem do Infante D. Henrique in 2005.